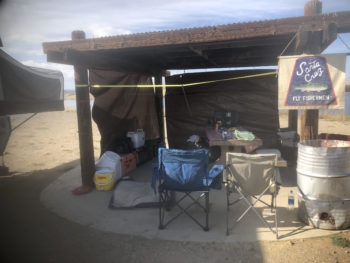 Fish Master Log Date Nov 3: Our beloved Stosh, bowing to the frailties of mortal life, was unable to host our November fish out to San Lois Reservoir. I agreed to stand in for him, as long as no organizing was to be involved.

When I arrived Wednesday afternoon, Elaine & John Cook had already been camping since Tuesday. They’d had some success amongst the weed patches around the islands. They also had thoughtfully placed a tablecloth and wood box at site 29, assuring it would be available for my arrival. I sat up camp (1) and returned to Aptos to pick up the mighty pokey-mon. (My 12ft. tin boat). (2)

FM Log Date Nov 4: Early Thursday morning Cooper and I launched the boat. Thank goodness I’d had the boat tagged the last time I’d fished on the lake. It had rained Wednesday evening, and my boat was full of water. No way would they have allowed me to launch.

We fished for naught for a couple of hours. That’s when I determined to find Elaine, for she is quite frequently in the close company of fish. I was right. I found her between the first and second Islands, firmly stuck to a Striper. With her in my sight, I quickly hooked and landed a couple of schoolies. I would offer this to all of our newbies on fish outs: keep Elaine in sight and you’ll probably find fish. It’s worked for John for ages. Indeed, he’d caught a couple that morning.

I moored the Pokey-man near our camp and had lunch with Pete, a new returning club member. He towed a gorgeous Air Stream in (3) and asked where to park so as not to impinge on any view-shed. I opined that the air-stream enhanced any view I might have.

After lunch, I motored to the north-west side of the fore bay where I found a dozen tubers and Kayakers from a neighboring fishing club. The name escapes me for the moment. (Don’t be alarmed, that happens on a regular basis). They were scratching out a fish here and there when Cooper decided he could catch a pelican. (4) That was the first of his three jumps into the drink.

The laughter of the other club’s members were still ringing in my ears when I decided to explore the great wall area. Near the south east corner, I finally located some fish on my 30 year old garage sale hummingbird. They were in 25’ water depth, holding at nearly 20’. There was a current pushing my boat from east to west, so I posted up current, about 40’from the wall and cast directly towards the wall. I counted down quite a while as I drifted over the fish, & then began a slow strip. I got a strong grab and had the fish on long enough to try to get it on the reel, with devastating consequences. Over the next hour I repeated this process several times. Eventually, after omitting the part where I tried to put the fish on the reel. I landed two smaller fish. (5)

Thursday evening the wind died enough to have a lovely campfire, and the four of us enjoyed a lively conversation as we took turns fussing over Cooper. Elaine shared her vast San Lois Intel with us. (Greatly appreciated!)

FM Log Date Nov 5: Friday Morning I woke early to find Yogi launching his u-boat. Still dark-thirty. A couple of cups of coffee later I launched and hustled to meet Jerry at the Rock Wall (6) by the old boat launch.  I arrived in the vicinity just as the sun rose, and promptly caught a small striper. I found Jerry shortly after he had released one of his own. Jerry caught a couple more over the next hour. Ospreys and bald eagles were my entertainment.

I returned to camp for brunch and was helped to shore by another new club member, Jeff. Pete treated us to a spread of bacon & eggs, whilst I whipped up a batch of Bloody Mary’s. Tim Loomis and a friend I haven’t met yet launched at about that time. Good Luck to ya!

Yogi returned after having caught a few. Probably just getting warmed up for his upcoming tuna trip.

Thought I’d take a quick nap. Two hours later, Elaine & John pulled out of the water. Elaine had landed 8 or 10 fish that morning, & John a few more, including one he described as a nice 20 plus inches, with a huge head. I envisioned Bruce Bocce’s head on a striped bass.

Tim Loomis returned with tales of the biggest striper he had ever landed in this body of water. He estimated 6+ lbs., or about twice the size of the biggest fish I had caught that day. Tim caught his on the Delta smelt pattern. In fact, that’s the only fly I used on the trip, and others echoed that sentiment.

Jeff and Pete had also each caught fish that day.

FM Log Date Nov 6: Saturday found Pete and myself on our own. We fished separately, scratching up a fish here and there. The wind chased me off the water early. Too windy for a fire, Pete and I retired to our respective campers to stay warm. A book for me, a movie for Pete. Early to sleep.

That pretty well sums it up. Fair fishing for many, great for a few. A pretty good fish out.

Enjoy the resource while you can, future dam construction will make this place much more difficult to get to, for quite some time.