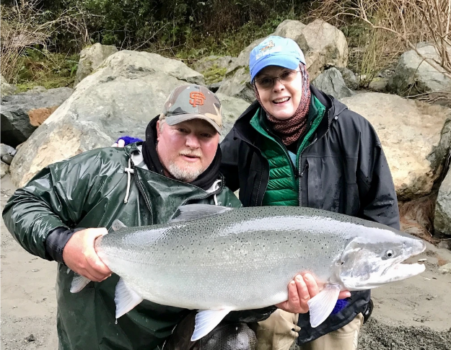 It is with great pride I report to you that after 4 years of effort we have achieved what once seemed to be impossible – a continuously run fishery monitoring plan for the Smith River, with a focus on sonar counting both Chinook salmon & Steelhead. As most know, the Smith is the last remaining anadromous fish river in California that is free flowing from source to sea. It is also the crown jewel of steelhead, with the California State record for size. It measured 42” X 23”, which calculates to somewhere between 29 & 32 pounds. At record weighting it topped the scale at more than 27 pounds.

Here’s a shortened version of the story. Ben Taylor, Chuck Bucaria, Lowell Ashbaugh and I began working on the Smith more than 10 years ago. We achieved a change in leader length to stop the “flossing-type” snagging of Chinook, and we worked with the Fish & Game Commission to stop the take of wild Steelhead. Both of these changes were necessary to preserve both species. Then, more than 6 years ago we began a dialogue with CDFW on how they monitor the runs of anadromous fish. As it turned out, they had no credible data other than to say “we know the Smith has healthy runs of Chinook & Steelhead”. Well, we thought that simply was unacceptable.

After a year talking with the CDFW Fisheries Branch Chief, we secured a meeting with Chuck Bonham, CDFW Director, shortly after his appointment under Governor Brown. We made a plea to he and the Fishery Chief that we’d write a Fisheries Management Plan for the Smith as a draft and work with their fishery biologist on the North Coast to make it an acceptable document to implement on the river. We offered to write the draft plan, pay costs to get it into a reviewable draft ($35,000), and get it into implementation. That started a nearly 3 year process but finished in 2019 with an approved Fisheries Monitoring Plan, which is where we are today.

Following that effort we worked with CDFW to obtain 3 DIDSON sonar monitoring devices, which CDFW said they had, but weren’t sure if they could authorize them for the Smith. As it turned out, more than 18 months went by without CDFW making the devices available. They said the equipment was not available and they had no funding for personnel to manage the program. They had no idea when it could be started.

We then decided to work with NOAA fisheries and the Tolowa Dee ni’ (TDN) Tribe which lives on the estuary of the river, and runs a small hatchery there. TDN applied for and received a grant from the Bureau of Indian Affairs (BIA) for staffing the project for 2 years, but was promised by CDFW that it would provide the DIDSON equipment. After nearly a year CDFW was not able to come up with the sonar equipment. TDN then applied to BIA again, this time for 2 sonar units, at a cost of $170,000. I also communicated to Director Bonham that CDFW was losing face and reputation with us and the Tribe. To his credit he pushed the state and regional Tribal Liaisons to work with the Tribe and the regional director to get the equipment to the Tribe. They then worked out a Memorandum of Understanding (MOU) to loan 2 DIDSON units to the Tribe.

Today, October 2021 we’ll have 2 DIDSON sonar counting units in the water for the migration seasons of both Chinook and Steelhead. The Tribe also has 2 additional units as spares in case of a failure. This program will be run totally by Tolowa Dee ni’ for both installation & maintenance of the sonar as well as staffing to do the monitoring and reporting to CDFW. This program will be run annually into the future. We need 2 life cycles of Chinook to have scientifically credible information that will be used to manage that fishery. This is a huge win for the fish and for those of us who love Chinook & Steelhead, and the Smith.

For those of you who have not fished the Smith, a most historic river in fly fishing lore, you should consider it. I’ve fished it only once, in February, and was able to land 2 bright Smith River Steelhead in the 12-15 pound range. I saw several others rolling that were larger. They are magnificent fish, and the Smith is one of our most beautiful rivers. Zack Larson, who I fished with, does guide, and Zack helped us write some of the fishery plan. Give him a call: 707-954-1085. BTW, the Smith receives significant rain in the winter, and flows can be very high. The day before I fished it was running at 16,000 cfs, but clarity as fishable. The next day the flows were down to 7,000 cfs, and the day I landed the 2 fish it was at 5,000 cfs. Hence, though it gets lots of water, it drops and clears quickly. If you love Steelhead or Chinook, this is California’s best place.