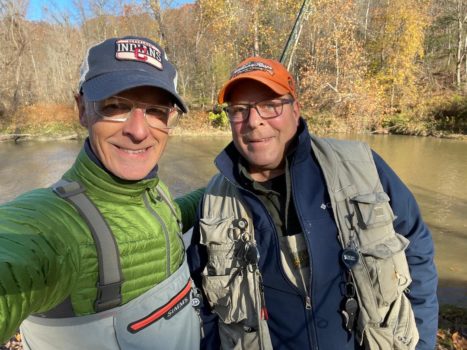 Happy Holidays everyone.   I hope you are all doing well looking forward to time with family and friends this year.

For those of you who made it to April Vokey’s presentation and tutorial on two-handed rods and gear for big rivers, you might be asking Santa for a Skagit head, some Rio MOW tips, and a variety of Hobo-Spey flies in yer stockings!

As April mentioned in her presentation, “spey” casting techniques are not only effective for two-handed rods, but also very effective for single hand fly rods.   Most of you know the “roll cast”.   Spey casting is associated with the roll-cast, or is in fact a roll-cast (I dare say), but with certain movements with the rod, that put your line and leader in different places on the water in front of you or to the side of you.

I encourage all of you to explore “spey” casting techniques by searching the inter-web, YouTube…   You’ll come across some new casting names and begin to understand what they are; single-spey, double-spey, snap-T, Circle-C, and more.   All very effective when there is no room to cast behind you, or just another set of great casting techniques to add to your repertoire.

A couple weeks ago, I had the opportunity to travel home to Ohio to see my mom and family.   I’m always timing these trips as a means to kick off the holiday season, and have a chance to fish for Lake run Steelhead on the Chagrin River, where I grew up fishing as a child.    This year I took my 13’ 6”, 8 weight two-handed rod, a box of steelhead flies and my waders.   Not much else you need.

When I arrived in Ohio it was a beautiful 70 degrees, but the water was low.  But weather changes quickly in these parts of the country and it’s common to get rain that will move the river from 150cfs to 400 or more, overnight.   Thursday was that day.    It has rained just enough to bring the river up.  Puffy clouds brought cover and contrast to the stunning fall colors still hanging on the maple, pin oak, buckeye and more.

It’s not always possible to time trips perfectly, but each time is an opportunity to get on the water with my brother Pat.   The river was beautiful and the flows made this place look about as close to a big British Columbia watershed as I could imagine.   We were on the water at 7:30 and immediately rolled two fish across the river, getting our hopes up quickly.    We fished hard till 10:00 then headed off to the Chagrin River dinner for a couple egg sandwiches and a hot cup of coffee before traveling about 30 seconds to the next place on the river.    Almost like it was here on the San Lorenzo in the old days.   If you don’t know this already, the San Lorenzo River was once noted as “The Most Famous” steelhead river on the Central Coast.   Mostly because guys brought their friends, and wives spent the weekend, went shopping, found easy access along the 11+ miles of fishable water, and found they could pull off the river and grab coffee, food, beer and whiskey in just minutes, no matter where they were on the river.   It was fun to do just that with my brother on the Chagrin, still in our waders and no one looking at us as differently.

The flow of the river enabled me to get a very good grasp on my spey casting techniques, delivery and swing.   It was soooooooo much fun.    When you can throw 80 feet of line almost effortlessly clear across the water and feel the line tug on your reel because it still wants to go farther – you’ll know what I mean.   As the wind picked up in the afternoon, I got to try a few other of the methods necessary- like the Perry Poke (coined after a fella named Carl Perry kept “blowing his anchor” – wait, what?…! – recovering his cast effectively.  Something that’s been done for 100 years, but never really called anything until spey casting anglers began naming it after Carl – at least that’s what I researched thus far), and casting with my right hand.    Yes – spey casting also teaches you to be ambidextrous.

Part of my timing in the coming years will be that time when the steelhead are in but the leaves have either not fallen off the trees yet, or are already completely fallen off.  As the day wore on, the wind gusts befuddled our success choking the water with leaves, and despite nice off-color water, I imagined hundreds of leaves bouncing off the noses of fish, causing them to hunker down no matter how colorful my flies tried to compete with the leaves.

Despite not landing any fish, it was the best day on the water with my brother on a river I never really appreciated as much as a kid.  Except, perhaps, on those warm summer days when Mike and I would quit fishing and go swimming!

The Great Lakes rivers are abundant with fish these days.   Not just lake run steelhead, but also Chinook, Trout, Smallmouth Bass, Walleye (mostly in the lake), Perch, Catfish, Carp, Pike, and some Brown Trout.    None of the fish are small.   The Grand, Chagrin, Rocky and even the Cuyahoga, that river that once caught fire in the 60’s when it was so polluted with industrial waste, are all now healthy fisheries year-round.    There is a Facebook page for the area called Ohio Steelhead.   Look it up.

Well – a lot of fun in store for us in the coming months.   December is Gordon Tharrett who is going to present to us on the Green River in Utah – and fly-fishing Utah/Idaho areas.  He’s been a guide for a few of our members for years.   Don’t miss this one.

January 5th will be a time for us to extend the holidays with a BBQ, Big Raffle, installation of Board and Directors AND our annual Club slide show which will be a collection of all the member photos from all the fishing you did this past year.     We will be meeting at the Sherriff’s Posse Hall on Ocean Street Extension.   Mark your calendars.

It’s been a great year and its fun seeing all the new members participate in fishing, fly-tying, and jumping on the Board to be a driving force for the future of the club.    Super happy to see how this is coming together.   If you’re interested, let us know.    We still have a couple of positions we would love help with.