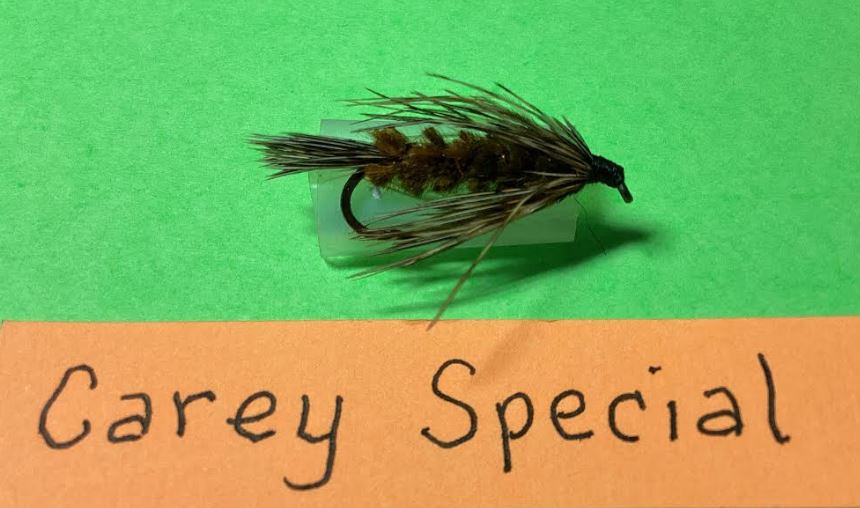 The Carrie is a searching wet fly. Extremely successful in lakes. Use on a sinking line and twitch or strip to entice the mighty fish. It’s a good fly to use with a trailer. There are various options in tying this fly. I personally prefer sizes 10 or 12 on 3X long hooks, with back feathers of the Ring neck Pheasant for tail and hackle.
HOOK: Many hooks will work. TMC 5262, 5263, 300.  Mustad 9672.
Crimp barb.
THREAD: Black 6/0
Attach to mid hook and wrap to rear of shank.
TAIL: Ring neck pheasant. Rear feathers for a brown fly, back feathers for an olive blue fly.  NOTE: Rear feathers are longer than back feathers.
Remove fuzz from stem of one feather. Stroke all barbs toward tip and feather. Measure from tips to 1/2 hook length. Attach that spot to rear of shank. Tips will extend beyond hook bend. Attach feather to hook shank up to two eyed lengths behind eye. Cut  access in front of thread wraps.
RIB: Medium sized copper wire which is optional.
Attached to top of mid shank, allowing a short tip to be bent backward. Snuggly attach back to rear of shank.
BODY: Dark olive chenille
Strip 1/4 inch of chenille off inner threads.  Attach threads to rear of shank. Wrap thread forward to 2 eye lengths behind eye. Wrap chenille forward using  touching wraps. Tie off, cut excess. Wrap wire forward, in opposite direction as chenille, in about six wraps. Then 2 final wraps of wire on shank, 1 on top of the other.  Twist to break.
HACKLE: Ringneck Pheasant — Rear feather for brown Carrie. Back feather for olive/blue Carey. NOTE:Rear  feathers are longer than back feathers.
Select feather with barbs at least a little longer than hook shank but up to 1 1/2 times hook length. Remove fuzz from stem. Cut stem short to one 8th inch from barbs. Attached stem behind eye with shinny side towards you. Positions thread behind eye. Tie one or two have hitches, let’s thread hang. Attach heckle pliers to several barbs at tip. Wrap hackle around shank 2-3 times, stroking barbs to rear with each  wrap. Tie off, DON’T cut excess. Stroke all barbs to rear then wrap in place by forming a thread head. With finish, cut thread.

Fly of the Month
Table of Contents -October Newsletter