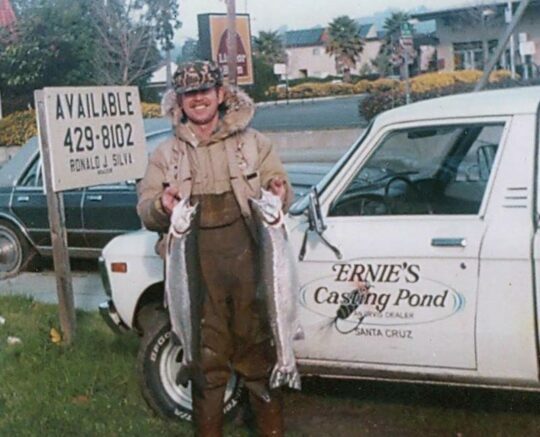 Well, here we are entering September!    Wow!  What a year getting back to “normal”.

I don’t want to rub it in, but if you missed the August Club BBQ for any reason in excusable, we really missed you.   What fun it was to see more than sixty of you at the Sherriff’s Posse Hall and how fun it was.

Shout out to Kevin Murdock and David South for working their magic at the BBQ and for taking the time to go to the store, get all the food, condiments, utensils, set up, and tear down/clean up at the end.   If any of you enjoyed the squash, those were Tromboncino and Green Squash from my garden.   Yum. Yum.

To all of you who brought items for the swap portion, that was really awesome.   Those funds will be going toward our high school scholarships.   And thank you to Elaine Cook for carefully organizing all of Doug Severin’s fly-tying materials into specific categories of which I think each bag easily had a life-time of fly-tying materials for each.   To say that I have so much fun doing the raffle with Jeff Goyert – who is expert at orchestrating the raffle and who easily and willingly takes your money – understatement.   It’s a blast calling out the numbers messing with you guys.  Just glad you play along nicely.  Way to go Ester and Dar for triple winnings and coincidently being great fly-tiers who helped Elaine last month.    You couldn’t stage this better.

Ernie Kinzli, our founding father – so to speak – was present and I was grateful to introduce him to a number of you who weren’t around during the days when he ran his fly-shop in Santa Cruz, then in Soquel right at the bridge of Soquel Creek, Ernie’s favorite haunt for Steelhead and Coho, back in the day.  Ernie donated a classic mix between a float tube and a raft that breaks down into it’s own carrying pack.  Watch for it in upcoming events.   The proceeds for that will be going to the scholarship fund.  Thank you, Ernie!

I cannot begin to say thank you enough to everyone.  When they say distance makes the heart grow fonder, that could not be more true.   I was just happy to finally see so many of you after this war we’ve been waging for far too long.

As my second, and unprecedented, term as your President begins to wind down, I am going to be at a loss for words given all the emotion, memories, and support I have to be thankful for.   Okay – kidding about the ‘loss for words’ part!   But anyhow, I’m not going anywhere and will be around to continue supporting the club, you, and doing some other fun stuff – like teaching the casting classes!

I LOVE casting.   I’m probably a better “caster” than I am an angler – or one who catches fish.   I’ve just loved learning all the way back to 1992 when Mona and I saw a couple of guys fly-fishing on the Stanislaus, and when we went to the Fly Fishing Show, I tried out a Sage SP (which I still have), and got my first “lesson” from Randy Swisher, none other than the infamous Doug Swisher’s son.

I practiced in the grasses at Ed Levin Park in Milpitas during my lunch breaks practically till my arm fell off.   Then when we had the “Con-Fab” in February – which I’m hoping we’ll bring back – I just had to beat Kathy Powers at the distance casting.   Nothin doin.  Kathy is an amazing caster, and probably the best dressed of all of us – any day of the week.    But I loved casting.

Then Walt Robinson, who was a member of this club and the San Jose club, was a Master Casting Instructor and fly-tier, gave me some lessons and helped me rig my reel with backing, line, butt section with a nail knot, and blood know to tippet so my line would turn over as beautifully as it should, provided I did what I was supposed to.

Walt suggested I go for my Casting Certification – which I did at the following years Fly-Fishing Show.   I was so new back then, and I still wasn’t as good as I really needed to be.   Ironically, that morning when I was casting on the casting pond, it was frozen over.   Burrr.     You should have seen my roll cast – more like a whip and a splat.

But I digress.  I love casting and while I’m far from expert, I enjoy seeing you improve, get it, and how you start controlling line so you know exactly where you can put a fly no matter the conditions.   Sure distance is a part of casting as the good fish always seem to be on the other side, or just a little bit farther.    And you will get there, working your way from the closest water first, and the farthest water last.   Often stopping somewhere in between, hitting the honey hole.

So come join me and the rest at Jade Street Park for the rest of the summer, last Saturday of the month – 1:30.    When winter comes, and we get some good water on the San Lorenzo, we can do some spey casting in the estuary, or some “chuck n duck” in the gorge.  And when Spring comes again, we can pull out the shooting heads for Pyramid and Surf Perch Striper fishing.      Can you say double haul?

See you at the Grange for an informative gig with Trout Unlimited and what we’re all working to do to restore salmon and steelhead habitat in the most challenging of times.