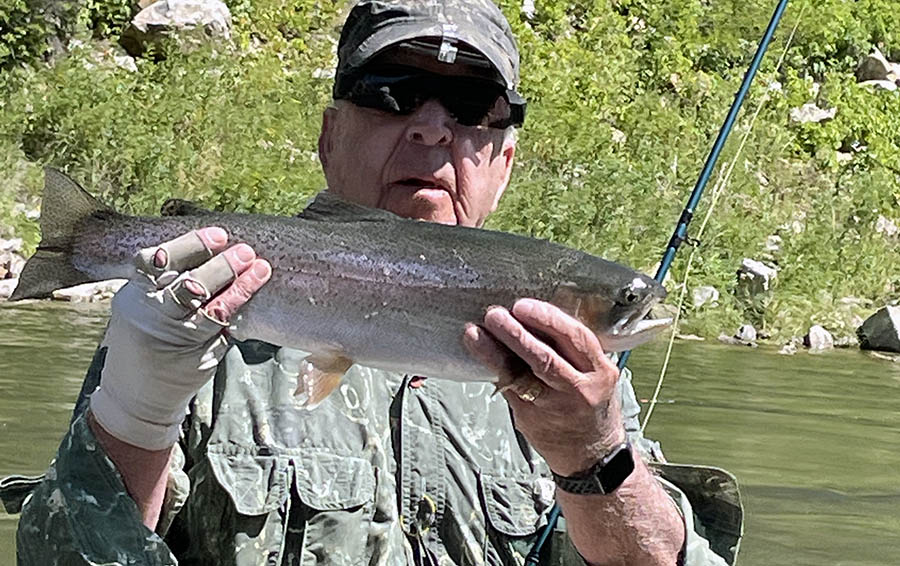 John and I hadn’t been out to fish for at least a year, and we had been craving some good ol’ river fishing with guides we know in Montana.  Our good friend and outfitter, Ed Lawrence, who has been a speaker at several SCFF meetings in the past, set us up with lodging and guides, and we set out on Saturday, August 13th, for Bozeman.

We arrived in the afternoon, got settled in the hotel, and met Ed and his wife at a nearby steak house for dinner and to make plans. He had told us before we came out that the first guide had tested positive for COVID, and that our first day of fishing was going to be up to us to arrange.

We had had a bit of trouble connecting with the owner of the Turo rental car we used.  We had to have an Uber driver drive us to the house where the rental car was, which seemed rather inconvenient, but that’s the way peer-to-peer car rides and car rentals often are, if you are into saving bucks not using cabs or car rental places.

John called a friend, Richard, who used to live in Corralitos, but now resides in West Yellowstone.  Richard has a boat, and he agreed to take us out on the Madison on Sunday. We met him on the river, Richard launched, I watched the boat, and Richard and John ferried the tow vehicle downriver about seven miles, then John drove Richard back to the boat.

We had great fun in the morning, fishing foam hoppers.  I caught three nice fish, John nicked a few, and although we only did a half day, we didn’t sit in the hotel moping about missing a day’s fishing.  It got hot in the afternoon, and the fish just dove deep and sulked.

Day two, Monday, was a bit of a challenge.  We had to get up at o’dark thirty and drive to Craig, up near Helena to meet with the guide.  Ed enlisted him to sub for the guide who had COVID, so we couldn’t complain.  Russ, the guide, took us out on the Missouri River, between Pelican Point and Cascade.  That part of the river is pretty slack water, slow moving, not very well oxygenated and warm. It was hot all day.  We each caught a couple nice rainbows on hoppers, but the water temps made for very slow, reluctant takes.

We moved from the hotel in Bozeman to a place in downtown Helena.  On Tuesday morning, the guide, John Hall, came to pick us up, towing his drift boat, so all we had to do was get in and go.  With John Hall, we did the section of the Missouri between Mid Cañon to Pelican Point, so we were above the section of river we had done the day before.  The water was a little faster-running, and John rigged us up with hoppers and droppers.  We caught many more fish that day, most on the dropper, which was a bead-head nymph, tied on a jig hook, turquoise body with a silver tungsten bead head and a teensy red tail.

The last day we spent was my favorite.  John picked us up at the hotel again, this time with his tricked-out bass boat.  It has a jet drive motor, and really, really long oars, I think John said they are 13 feet long. We did the section of the Missouri that is impounded by two dams, aptly dubbed “The Land of the Giants.”  The challenge that day was the wind.  My John had to fish sitting on the prow chair.  I fished the stern, alternately bracing myself against the chair in the stern and sitting in it.  I can’t cast very well seated, so I mostly just tried to keep from being blown overboard.

We were rewarded for our efforts with many very hefty, healthy rainbow trout.  We fished a double rig again, the upper fly was a red tungsten bead head with a purple body with silver wraps; the bottom fly was a was on a jig hook, silver tungsten bead head, turquoise body and a teensy red tail, like the one we fished on the river the day before.  The big fish mostly liked the lower fly, and several times, they bent it almost straight.  I felt lucky to have landed fish, considering!  I think the 4X tippet is what saved me from breaking them off, because these guys often like to jump, shake their heads, and rub on rocks to get loose.

After four days of frantic fishing, both of us were pretty well worn out, drove back to Bozeman, had dinner at Outback, and crashed.  We worked a deal with the Turo car owner, left the car in the hotel parking lot and Uber’ed back to the airport.  We got back home Thursday evening, happy to be back, satisfied with the fishing we got to do in Montana.