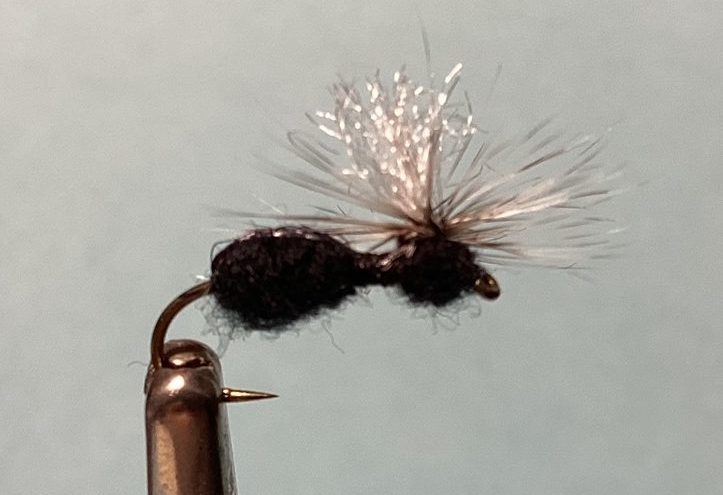 There are many and patterns, most of which are hard to see on the surface of the water. Here is one with a nice white post. Ants are most effective mid summer on and are more available to fish on windy days. Add floatant and fish with drag free presentation. They are good on lakes as well.
HOOK: TMC 100  Sizes 12 to 16.
THREAD: Black 8/0.     Attach mid shank
OVER BODY: White Antron yarn
Attach Antron to back half of shank and extending to the rear of hook. Note: Antron pieces need to be long enough to go over rear back body and then up as post.
REAR BODY: Black super fine dubbing and black permanent marking pen.
Dub a bulbous rear body up to mid shank, no further. Pull Antron snuggly over rear body and tie down. And attach Antron to top of shank with touching wraps forming a narrow mid body, about 1/4 of shank. Note: if tying a size 12 hook, additional touching thread wraps back to rear body then forward again.
POST: Continuation of white Antron
Hold Antron upright. Make 4 to 5 thread wraps upward around Antron. Then make 4 to 5 wraps down to base.Make a couple of wraps in front of post to hold upright.
HACKLE: grizzly  barbs equal to 1 1/2 to 2 times hook gap
Prepare hackle by cutting off fuzzy end then cutting 4 to 5 barbs short at base of stem (crew cut).
Identify shiny dark side of hackle. Position on your side of hook, shiny side facing you, tip to rear, and crew cut at base of post. Tie in place in front and behind post.
FORWARD BODY: Black super find dubbing. And some ants have a red forward body, so thread can be changed to red and red superfine dubbing used for this section.
Wrap a small bulbous forward body from eye back to midsection.
HACKLE: same feather from above
Wrap thread behind post, then forward, then in front of post, then allow to hang on your side. Using hackle pliers, wrap hackle around base of post about four times , then allow to hang on your side. Bring thread up in front of hanging hackle till parallel to table.  Wrap around post and under parachuted hackle about three times. Several half hitches behind hook eye. Cut thread. Cut excess hackle. Cut Antron so that it equals hook shank length. Push up on heckle from beneath hook to be sure it is parallel to table. Trim any barbs that hang below.

Fly of the Month
Table of Contents -August Newsletter