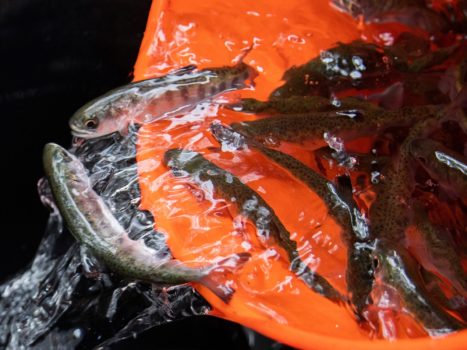 It is estimated that up to 95% of wild salmon habitat has been wiped out by damming of rivers in California. Hatcheries have helped make up for the impact of dams.  Now amid the ongoing drought, the California Department of Fish and Wildlife has launched a program to release 17 million Chinook Salmon smolt into San Francisco Bay and others—including Monterey Bay. The fish are being loaded in trucks from hatcheries and transported to the bay and released. Historically, the fish have been released into rivers and streams.  But, with drought-induced low flows coupled with warmer temperatures, the survival rate is extremely low. The hope is that more fish will have a better survival rate (estimated to be about 80%) which could provide some support for the $900 million commercial and sport salmon fishing business in the state. For more information, check out the web link.